"Whittle is one of the great engineers of the century, perhaps the greatest if judged by the scale of the consequences of his invention".

From A Wrack Behind by Lord Kings Norton 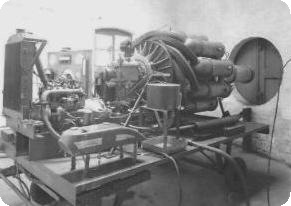 Frank Whittle filed his first patent for the jet engine in January 1930, after working on the idea of combining gas turbines and jet propulsion as a cadet at the RAF College, Cranwell. Surprisingly, the Air Ministry showed no official interest in the patent, and allowed international publication.

By 1936, Whittle had received enough private backing to start Power Jets, the company that would develop his ideas. Leading aviation companies started their own research in this area, but only Whittle's design actually worked.

With the threat of war, Government support arrived as gas turbines could give the Allies superiority in the air. The rapid development of the engine was the paramount consideration. The first aircraft to fly powered by a Whittle gas turbine was the Gloster E28/39, which had its maiden flight at Cranwell in 1941. However, engine development was too slow and, to accelerate the process, Roxbee created the Gas Turbine Collaboration Committee. This consisted of all the companies working on jet engine projects at the time, including Frank Whittle's company Power Jets, and was a forum in which they shared their design work and test data. Whittle was against the idea at first, but as he recollected in his book, Jet - The story of a pioneer:

"…we later became enthusiastic supporters, and I am firmly convinced that Britain owes much of its technical superiority in this field to the Gas Turbine Collaboration Committee. There were many intrinsic difficulties in the proposal, but somehow or other, under the skilful chairmanship of Roxbee Cox, a good deal of thin ice was skated over very successfully."

Roxbee later said that this was one of the most thrilling periods of his life and the formation of the GTCC proved to be a major milestone in the development of the jet engine. Indeed, it continued to meet for many years after the war ended.

Successful though GTCC was, progress was still not yet fast enough for the war effort, and in July 1941 Roxbee initiated the programme to share the jet engine with the USA. Surprisingly, the aircraft industry in the USA had not yet realised the potential of the jet engine but they learned fast, and soon the unparalleled industrial might of the USA was being applied to the revolutionary concept.

In 1944 the Minister for Aircraft Production, Sir Stafford Cripps, nationalised Power Jets, making Roxbee both Chairman and Managing Director. The company now had no competitive position in jet engine manufacture at all, and it fell to Roxbee to correctly position this important nucleus of the propulsion revolution. The response was to merge Power Jets with the jet engine activity at the Royal Aircraft Establishment to create the National Gas Turbine Establishment at Pyestock. Roxbee became its first director and held, as the Daily Express put it, "one of the most responsible posts outside Parliament".

Letter re: news, including a new job (no details due to secrecy) (December 1942)

Letter re: Cripps' refusal to let Cox go back to the Board and chairing the Royal Aeronautical Society aeronautical education meeting (which led to the development of Cranfield) (June 1943)

Letter re: Power Jets appointment, newspaper reports of it and board members (April 1944)

Letter to Mrs Amelia Cox (Roxbee's mother) from Stuart Greenwood, congratulating her on her son's Chairmanship of Power Jets (May 1944)

Letter re: Power Jets to become a Government establishment, and offer of Chairmanship (February 1946)

Letter re: family news, and mention of exaggeration in news of Power Jets problems (April 1946)

Appraisal of Frank Whittle's work, sent on request to the Royal Commission on Awards to Inventors (Letter, September 1947)