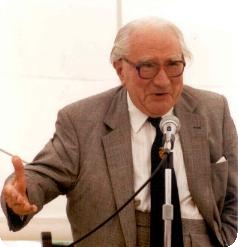 After many years working within the Civil Service, Roxbee finally left in 1954 on the grounds that:

"Although in the Fuel and Power hierarchy my post was at Deputy Secretary level, I concluded that being a scientist, even though an Applied Scientist and not a Pure one, I should never achieve a Permanent Secretary post. I therefore decided to leave the Civil Service". [From A Wrack Behind by Lord Kings Norton]

Then followed a very successful period within industry, where he enjoyed the directorship or chairmanship of a number of companies, including Metal Box, Wilmot Breeden, Campden and Chorleywood Food Research Association, Cotswold Research Ltd., Berger Jenson and Nicholson, and Hoechst UK Ltd. A full list is provided within the Timeline available on this site.

As testament to his unstoppable energy in later life, he won the 1986 Prince of Wales Award for Industrial Innovation and Production with Mr. Anthony Bird at the age of 83! They won the award for successfully developing the Cotswold linear motor separator, a machine which separated non-ferrous metals from broken-up scrap. They received the award from His Royal Highness The Prince of Wales at Highgrove House in Gloucestershire.

[Picture is of Lord Kings Norton speaking at Campden Day, 1991, as President of the Campden and Chorleywood Food Research Association]