"I seem to have had time for an active social life with many clever and agreeable friends, time to help historians and geographers of the world of aviation, and time to develop and enjoy my aeronautical collection".
From A Wrack Behind by Lord Kings Norton 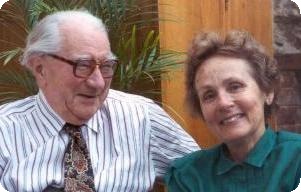 Roxbee married his first wife, Marjorie Withers, on 12th July 1927. Their first son, Christopher, was born in October 1928 and their second, Jeremy, followed in May 1932. He affectionately referred to Christopher as "Posh" and Jeremy as "Jem". Marjorie died in 1980, and he married his second wife, Joan Pack, in 1982. His devotion to his family was unfailing despite his professional pressures and achievements, and this is reflected in his commitment to writing regularly to his mother, until her death in 1948.

The following materials from the Archive are intended to provide an insight into his family life, although naturally many of the other letters listed within other sections on this site invariably contain personal information as well.

"Portrait of a full-blown spouse in the act of espousing" (Sketch, 1927)

Part of letter to mother, containing sketch of Cox, Marjorie and dog (1927/8?)

Nursery rhyme and three Cox drawn birth announcements for his son (Document, May 1932)

Re: secrecy over new job at Power Jets and family news (Letter, April 1944)

Re: Jeremy's scholarship, VE Day, and being asked to give Wright Brothers lecture in Washington (Letter, June 1945)

Re: his mother's health, and mentions meeting Orville Wright during his trip to the States (Letter, January 1946)