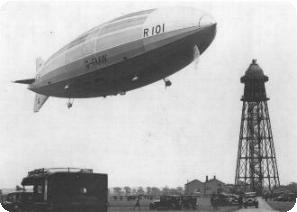 In 1924, Lord Kings Norton joined the R101 design team at Royal Airship Works, Cardington. The team was led by Colonel V.C. Richmond, who had stimulated Roxbee's interest in airships through his lectures at Imperial College. Roxbee was instrumental in the design of the airship, adopting a mathematical curve to calculate its shape rather than using the more traditional method of moulding flexible wooden laths. He submitted a paper on the method ("External Forces on an Airship Structure") to the Royal Aeronautical Society in March 1928, for which he won the R38 Memorial Prize.

Following the completion of the design, the smaller R33 airship was used to test external loads on the structure, and Roxbee was involved in the test flight.

Roxbee applied to fly on the R101's proving voyage to India in 1930, but was refused in favour of VIPs. His personal disappointment soon became his good fortune, however, when the airship crashed a few hours from Cardington, at Beauvais in France, killing 48 of its passengers and crew. The official inquiry later found that the the disaster had been caused, not by its design, but by a hydrogen leakage.

In August 1931, Roxbee took up an opportunity to fly on the Graf Zeppelin, from Feltham to Freidrichshafen in Germany.

Discussion with Southwell and Jones re: airships (Report, August 1924)

Letter to mother, with sketch of himself in a maze of curves (October 1924)

Re: discussions with Richmond over his scheme (Letter, January 1925)

Letter to mother with sketch of "Our calculating female returned to-day" (September 1925)
(The "calculating female" sketch refers to Hilda Lyons, a Cambridge mathematician within the R101 design team)

Letter in which Cox describes his nightmare in which an airship crashed (January 1927?)

Report of the R101 Enquiry: Presented by the Secretary of State for Air to Parliament by Command of His Majesty (March 1931)

Letter re: invitation to premiere of "Dirigible" (June 1931)

Letter re: trip on Zeppelin and move back to Bedford (August 1931)

Part of letter re: polar expeditions by US Airship Shenandoah and R36 (Date unknown)

The Airship Heritage Trust: R101 - the final trials and loss of the ship