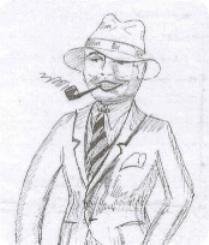 Roxbee started at Imperial College in the autumn of 1922. He was only 20 years old, an early age at which to begin a postgraduate course, and registered for a two-year course of lectures in aeronautics, studying for both a Ph.D. and a D.I.C [Diploma of the Imperial College], under Professors Sir Richard Glazebrook and Leonard Bairstow.

Despite any initial doubts he had, with his hard work and ability, Roxbee completed his thesis entitled A Reciprocal Function Solution of Laplace's Equation in Two Dimensions with an Application to an Aerofoil Section.

In the summer vacation of 1924, on gaining his Ph.D., Roxbee went to work for a short stint at the National Physical Laboratory, which had been founded by Sir Richard Glazebrook, his former professor.

Roxbee considered one of his visiting lecturers at Imperial, Lt Col V. C. Richmond, particularly interesting. Richmond had been involved during the 1914-18 war in designing non-rigid airships and as Roxbee later said in his memoirs: "He lectured on airships and did it well". Meeting Richmond was to have a profound impact on his future, as Roxbee readily accepted his offer of joining the design team for the R101, which he was leading at Cardington.

Part of letter mentioning starting at the National Physical Laboratory (1924)

Letters of recommendation from Prof. Leonard Bairstow and Prof. A. N. Whitehead, both of Imperial College, London (1924, 1927)