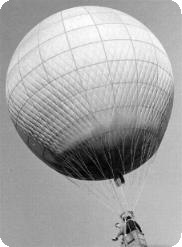 Over his lifetime, Roxbee amassed a large collection of ballooning memorabilia of which he was particularly proud. In 1941, a bomb blast destroyed his London office, and with it a ballooning print that he greatly admired. As he searched to replace it at the end of the War, he discovered a fascinating range of other ballooning prints and also plates, jugs, ceramics, stamps, books and other ephemera. His collection was born.

His first flight in a balloon took place on Sunday 8th May 1949, at the end of the Royal Aeronautical Society's annual Garden Party and Flying Display at White Waltham Aerodrome. M. Charles Dollfus brought his 10,000 cu ft hydrogen balloon over from Paris and piloted the ascent, with Roxbee, as the retiring President of the Society, as his passenger. The balloon flew for 22 minutes, landing at Winkfield Park five miles away. After landing he said:

"It has been a dream of a flight. All my life I've wanted to go slow in an engineless machine to see what it is like without a background of noise".

His lifelong passion for lighter than air flight was also demonstrated in his Presidency of the British Balloon Museum and Library from 1980 until his death in 1997.

Links to related material available on the Web