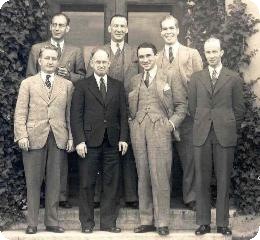 In 1936, the Government created the Air Registration Board, a new body that would examine civil aircraft and issue certificates of airworthiness. With his experience in air safety from the Royal Aircraft Establishment, Roxbee became their Chief Technical Officer in 1938. The magazine Flight reported on his appointment in its issue dated 3rd February 1938:

"The appointment will be received with satisfaction by the aircraft industry, many members of which have come into contact with Dr. Roxbee Cox during his term of office at Farnborough. Those who have not will probably be surprised on meeting him for the first time to find not a learned scientist with long whiskers, but an alert and very much alive young man with original ideas on the subject of aircraft design."

Later that same year Roxbee led a five-week fact-finding trip to the United States and Canada. Marjorie was concerned at the length of the visit, as relations with Nazi Germany were worsening, and war looked likely. The hectic schedule included time in Montreal, Washington, Baltimore, Los Angeles, San Diego and New York, visiting companies such as Lockheed, Sikorsky and Douglas and Northrop. As Roxbee's team returned on the Queen Mary, Neville Chamberlain returned from Germany promising "Peace in our time".

Roxbee renewed his acquaintance with the Air Registration Board, some thirty years after he had been at its foundation, by becoming its Chairman between 1966 and 1972. The Board lay down the modern standards of airworthiness, and during Roxbee's time was greatly concerned with the development of Concorde and supersonic flight. This highlights Roxbee's sheer longevity, in one lifetime flying in both scheduled services of the Graf Zeppelin and Concorde.

Letter re: 'Flight' reporting on his appointment (February 1938)

Lettercard from Southampton, about to embark ship (September 1938)

Postcard to mother from Ottawa (September 1938)

Letter from the Hollywood Plaza Hotel, California, plus envelope (October 1938)

Postcard to mother, with picture of SS Queen Mary (November 1938)