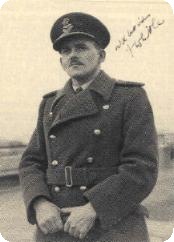 [Text reproduced from A Wrack Behind by Lord Kings Norton]

"In September 1947 I received a letter from Mr. P.H. Goffey, the Patents Branch civil servant working for the Royal Commission on Awards to Inventors, asking me to make an appraisal of Whittle's work for the information of the Commission. I regard the letter which I wrote in reply as the most important letter I have ever written and although it has been quoted by Whittle and his biographers, I want to include it here because I am proud of it. I would not wish to alter a word. I knew I was writing about a great inventor, a great innovator, a visionary whose visions I was sure would be realised - a great man. It is a privilege to add - a friend of mine… Here it is.

"You have asked me for an appraisal of the work of Frank Whittle. It seems to me a little strange that in this year of Grace after so many people, including myself, have defined the major contribution to progress which Whittle has made, and after so many learned and professional bodies have given him their major awards, any appraisal is necessary. However, I will do my best to sum up the Whittle achievement once again.

I think you are aware that jet propulsion is one of the most direct illustrations of a fundamental law of nature - Newton's Third Law - and has been recognised by man since at least 150 B.C. (I now believe this should be A.D. 60), when an engineer with the somewhat flamboyant name of Hero made proposals for its employment in an engine.

The gas turbine is also not new. The first design recognisable as a gas turbine was patented by John Barber in 1791. Thereafter there was only very slow progress in gas turbine technology until the present century. It is generally accepted that progress was delayed by the lack of material suitable for continuous operation at high temperatures with appreciable stress.

His patent embodying this idea is dated January 1930. His subsequent difficulties in getting his idea taken up and exploited are too well known for recapitulation here. Finally, with the aid of two men who contribution has been too often overlooked, J.C.B. Tinling and R.D. Williams, a jet propulsion gas turbine engine to Whittle's ideas was designed, constructed and, in 1937, tested.

It is one thing to have an idea. It is another to have the technical and executive ability to give it flesh. It is still another to have the tenacity of purpose to drive through to success unshaken in confidence, in the face of discouraging opposition. Whittle, whose name in the annals of engineering comes after those of Watt, Stephenson and Parsons only for reason of chronology or alphabetical order, had these things. It is, I think, generally admitted that without Whittle's determination to turn his idea into reality we should not have begun to think about the jet-propelled aeroplane (whatever thoughts we might have slowly developed about the propeller gas turbine aeroplane) until the idea had been forced upon us by the exploits of the enemy with their jet-propelled machines. In the closing stages of the war, however, we had in fact developed, on the basis of Whittle's efforts, a new fighting weapon in the form of the Meteor aircraft; now we are well on the way towards a jet-propelled air force, and the gas turbine engined civil air fleet is being developed.

It may be said that without Whittle the jet propulsion engine and the other applications of the gas turbine would have come just the same. They would. But they would have come much later. Whittle's work gave this country a technical lead in aircraft gas turbines of at least two years. Properly exploited and maintained, this lead should mean that this country can sell its aircraft gas turbines abroad for years to come. You know better than I do the extent to which Rolls-Royce and de Havilland's are producing income for the country. The first of these firms is achieving this with engines which are the direct descendants of the Whittle engine. The second is achieving its contribution with an engine which would not have been designed but for the stimulus and information provided by the early Whittle successes.

The success which Whittle achieved reacted rapidly upon the work of others in the gas turbine field, notably the R.A.E team working in association with Metropolitan Vickers Ltd. They have been concentrating on a propeller engine with an axial compressor, in contrast to Whittle's jet propulsion engine with a centrifugal compressor. Whittle's work inspired them to swing over to axial compressor jet propulsion, and to that extent he is the stepfather, so to speak, of that class of engine, the first example of which in this country was the Metropolitan Vickers F.2.

The notable success scored by the British aircraft engine industry in the aircraft gas turbine field, a success due in part directly to Whittle, and as for the rest, directly stimulated by him, naturally attracted attention in other fields. The successful application of the gas turbine in the difficult aeronautical field begat endeavour in the land and sea applications of the gas turbine. The knowledge gained through research and development for the aircraft application was largely applicable in these other directions. Here again, if the chance is grasped, there is a wonderful opportunity to build a great industry and, if our technical lead is properly exploited, one which will provide us with considerable national income. If and when this comes to pass, some of the credit will be Whittle's.

So far the gas turbine in Great Britain has been generally regarded as a means of propulsion of fighting aircraft. I think posterity, looking at its achievements on land and sea as well as in the air, will see it rather as a great commercial asset - presuming that we today do our duty in exploiting it. They will see too that the initiative in its development came from aeronautical technologists, and at the head of these they will see Whittle." "

[It is worth noting that this letter was of considerable influence in the Royal Commission on Awards to Inventors' recommendation to the Ministry of Supply that Whittle should received an ex-gratia award of £100,000 free of tax upon his retirement].