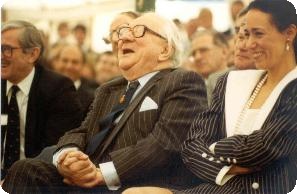 Harold Roxbee Cox was born in 1902, the son of William John and Amelia Roxbee Cox (nee Stern). As a child, his father took him to air shows and air races, and his imagination was fuelled by pilots of the time such as Claude Grahame-White, B C Hucks and Gustav Hamel, beginning a lifelong fascination with aircraft.

He left Kings Norton Grammar School at the age of 16 and joined the Aircraft Design Department of the Austin Motor Company at Longbridge, which was, at that time, designing and building light aircraft such as the Whippet and Kestrel. Guided by the chief designer, he was responsible for the design of the tail unit of the single-seat Whippet. When Austin's aviation interests failed in 1920, Roxbee (as he was known to his friends) was transferred to the workshops to work with the apprentices, and worked towards an external London University BSc, which he gained with first class honours.

In 1922, he left Longbridge for London, where he began studying for both a PhD and a D.I.C (Diploma of the Imperial College) at Imperial College in the aerodynamics and instabilities of wings. Go to the Student days section to find out more.

As soon as he had graduated, he joined the state-financed Airship R101 engineering team at the Royal Airship Works, Cardington. Go to the Airships section to find out more.

After the R101 tragedy, the work that had been planned for the R100 was cancelled, and Roxbee Cox began working on the development of aeroplanes at the Royal Aircraft Establishment at Farnborough. It was here that he contributed to aircraft safety with his studies on the problem of wing flutter and the stability of structures. Go to the Aircraft engineering section to find out more.

By 1936, relations between what was still the Empire and Nazi Germany were steadily deteriorating, and there was a need to be prepared in case of war. An Air Defence Department was founded at the Royal Aircraft Establishment, and Roxbee became its head. Much of this work was with barrage balloons. There were two aims to this research. Our balloons needed to be able to bring down enemy aircraft, and conversely our aircraft needed to go through any barrages unscathed.

Immediately war was declared, Roxbee was transferred back to Farnborough as Superintendent of Scientific Research and was then moved to the new Ministry of Aircraft Production in May 1940, as Deputy Director of Scientific Research. He dealt with a whole range of wartime projects, and indeed was promoted to become Director of Special Projects in 1943. Roxbee had the special responsibility to work on jet engines. It was now Roxbee's job not to be the engineer, but the facilitator.

The major aerospace companies had each been conducting their own research into combining gas turbines and jet propulsion, but only Group Captain Frank Whittle's jet engine design worked. However, collaboration was now more important than trade secrets, with the government encouraging any efforts that could give the Allies any edge in conflict. Roxbee founded, and chaired, the Gas Turbine Collaboration Committee, helping to pool ideas and experience. In 1944 the Minister for Aircraft Production, Sir Stafford Cripps, nationalised Power Jets, making Roxbee both Chairman and Managing Director. Power Jets was restyled again in 1946 as the National Gas Turbine Establishment with Roxbee as its Director. Go to the World War II and the jet engine section to find out more.

In 1948, Roxbee moved from the National Gas Turbine Establishment to become Chief Scientist at the Ministry of Fuel and Power, where he applied his gas turbine knowledge for the benefit of power generation.

In 1954, Roxbee left the civil service to begin a second career in industry and over the next twenty years he served on the boards of companies as diverse as the British Printing Corporation, the engineers Ricardo, and chemicals company Hoechst UK. He also chaired the packaging company Metal Box and the paint-makers Bergers, Jenson and Nicholson, and was President of the Campden and Chorleywood Food Research Association for 33 years. Go to the Industrial career section to find out more.

Playing a wider role in business, Roxbee was involved with a number of industry bodies. He was the Chairman of the Council for Scientific and Industrial Research, and President of both the National Council for Quality and Reliability and the Institute of Marketing.

In the summer of 1943, as the vice-president of the Royal Aeronautical Society, Roxbee chaired two open meetings during to discuss the education and training of aeronautical engineers. The Minister for Aircraft Production, Sir Stafford Cripps soon commissioned Sir Roy Fedden, a speaker at the meetings, to report on the state of aeronautical education. His 1944 report "A College of Aeronautics" was the blueprint for Cranfield. The College of Aeronautics opened in October 1946, and was truly a unique establishment. The concept of hands on learning with access to aircraft and an airfield was completely revolutionary. In 1953, Roxbee was appointed one of three new Deputy Chairmen on the Board of Governors, and in 1962, on the death of Sir Frederick Handley Page, he became the Board's Chairman. Years of negotiation followed, and university status and a Royal Charter were granted in 1969. Cranfield was now a university. Go to the Cranfield University section to find out more.

When Roxbee was honoured with a life peerage in 1965, he took the title Lord Kings Norton of Wotton Underwood and his chosen motto, "Precision and Tolerance", was highly appropriate. He specifically intended these words to have a double meaning and they summed him up perfectly. They were to be interpreted in both their narrow engineering context, and also their broader, social context. He was a man with great skills in science. He was also a man whose success lay in his tolerance. It wasn't only that he was a good with people, but also a diplomat. He believed that there shouldn't be divisions between disciplines: the arts and sciences, technology and management, commerce and education. It was an ethos that he lived by, successfully having careers in aviation, education and industry.

Pamphlet: Lord Kings Norton: A biographical sketch (written on the occasion of his 90th birthday)

Book: "A wrack behind" by Lord Kings Norton of Wotton Underwood. Printed by Cranfield University Press, 1999.